It can be hard these days to keep up with everything that’s happening in Lebanon: the staggering inflation rates, the wheat and fuel shortages, the increasing poverty levels, the stalling Beirut Port blast investigation..

This is why we compiled  a non-exhaustive list of people to follow on Twitter to help you keep up with the latest news in Lebanon. After all, at Alphabetical Order, one of our missions is to shed light on the current education and poverty crises, create knowledge through research and disseminate the outcome of such research for the benefit of the wider public.

So by following journalists, researchers, activists specialized in various fields such as justice, politics, education, economy, culture and social movements, you will soon be able to stay up to date with (almost) all the news in Lebanon.

Who to follow to better understand the economic and social situation of Lebanon in 2022? 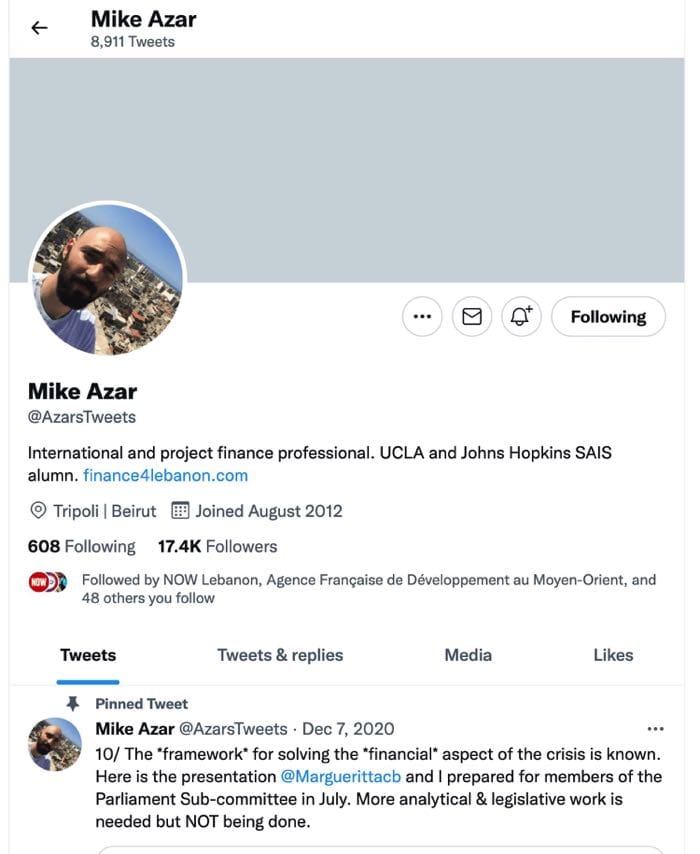 @AzarsTweets, Economics, FMI (English): Mike Azar is a debt finance advisor and former professorial lecturer of international economics at the Johns Hopkins School of Advanced International Studies in Washington, D.C. If you want to know the latest about the ongoing negotiations between the Lebanese government and the International Monetary Fund, he is the person to follow. 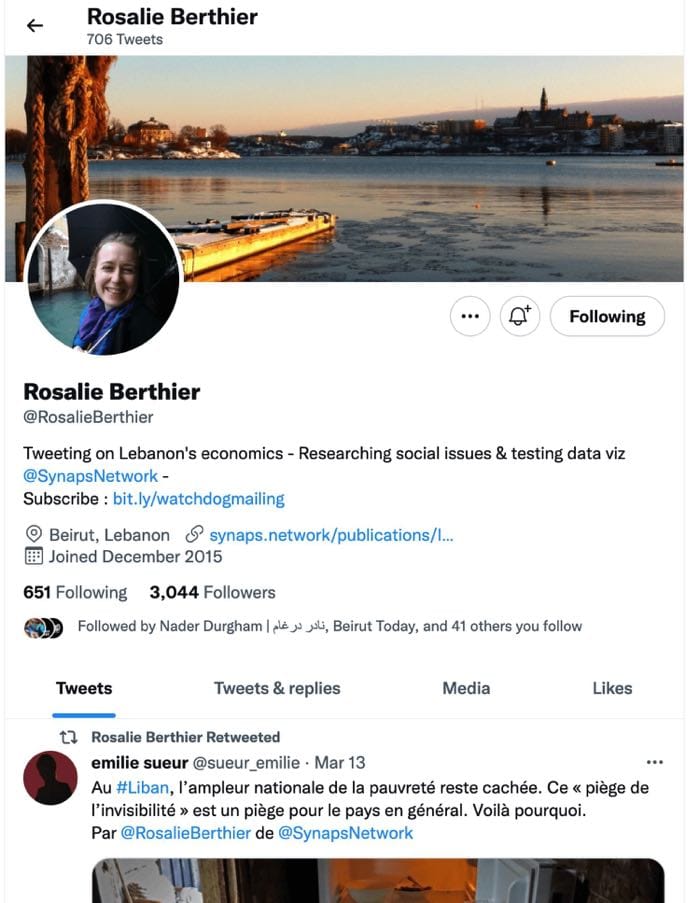 @RosalieBerthier, Economics (English, French): Rosalie Berthier leads Synaps’ research on Lebanese macroeconomics. Her professional experiences in project analysis, incubation and management, as well as her MSc in Sociology from the London School of Economics make her a unique expert on economic issues affecting Lebanon. You can subscribe to her watchdog mailing list: http://bit.ly/watchdogmailing 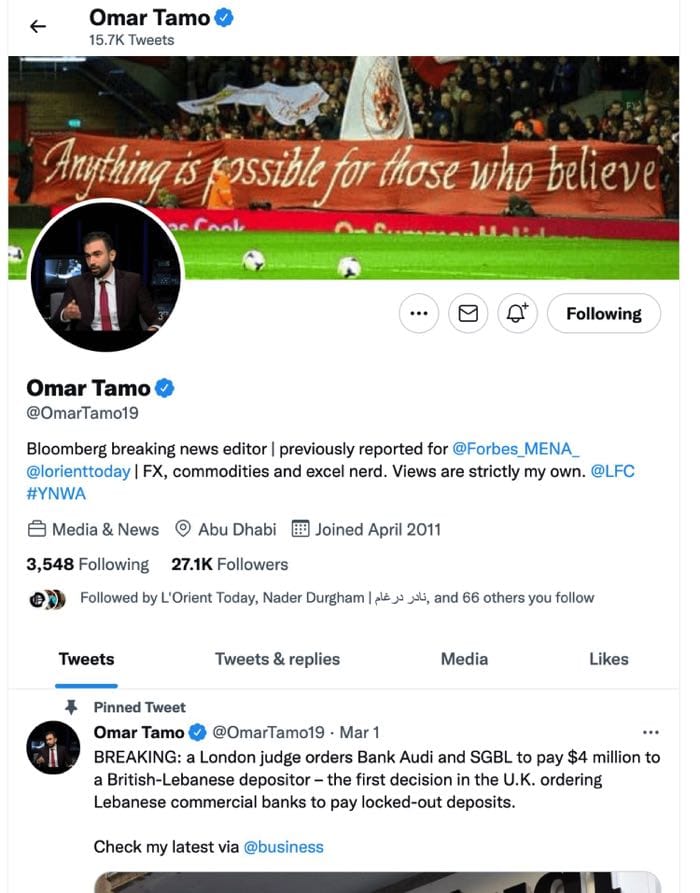 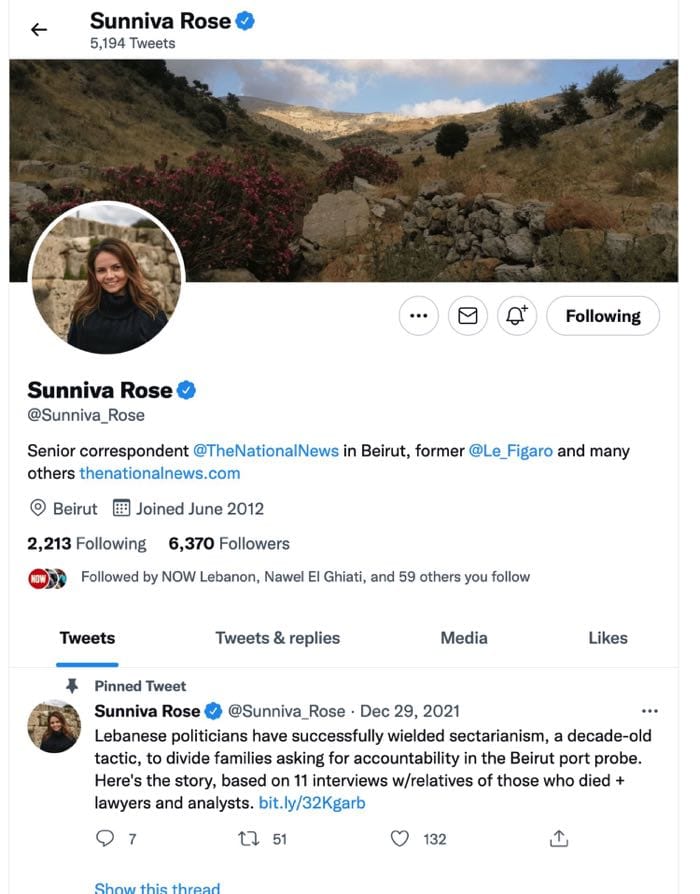 @Sunniva_Rose Social, Economic, Politics (English): Sunniva Rose has been a correspondent in Beirut for The National for over two years. Previously, she was a freelancer for Le Figaro, the BBC, Deutsche Welle and Middle East Eye, among other media. She is particularly active on twitter and will fill your feed with general news about Lebanon.

Who to follow on social media to learn more about politics & the upcoming 2022 elections in Lebanon? 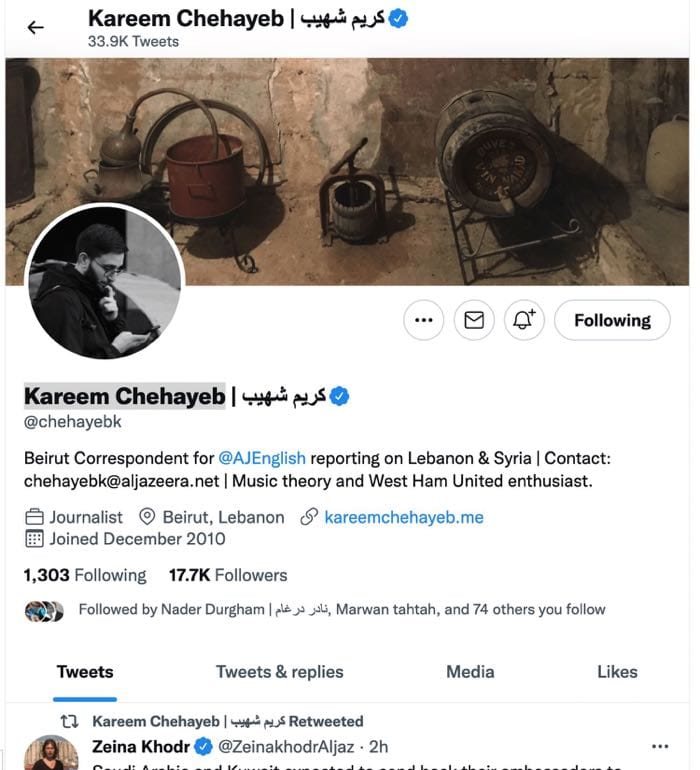 @chehayebk, Economics,  Elections, Investigation (English): Kareem Chehayeb is the Beirut correspondent for Al Jazeera English. Previously, he worked as an investigative journalist for the Public Source, which allowed him to delve into topics ranging from the culture of impunity to corruption and to the country’s social movements. 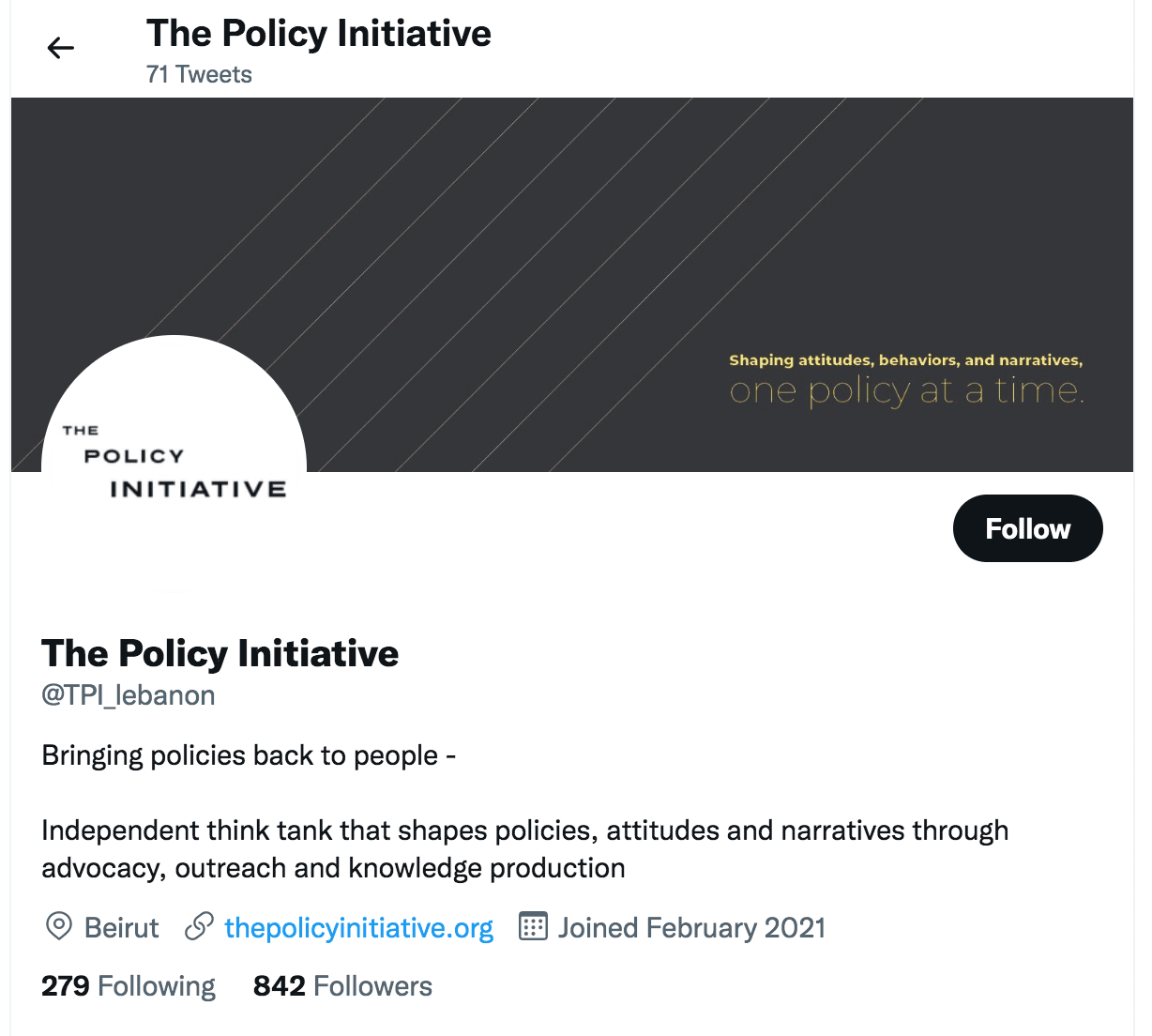 @TPI_lebanon, Elections, Independent Parties (English): The Policy Initiative is an independent think tank currently focusing on the upcoming Lebanese parliamentary elections. By following their page, you will learn more specifically about the opposition and independent parties. Their graphics particularly are a real plus. 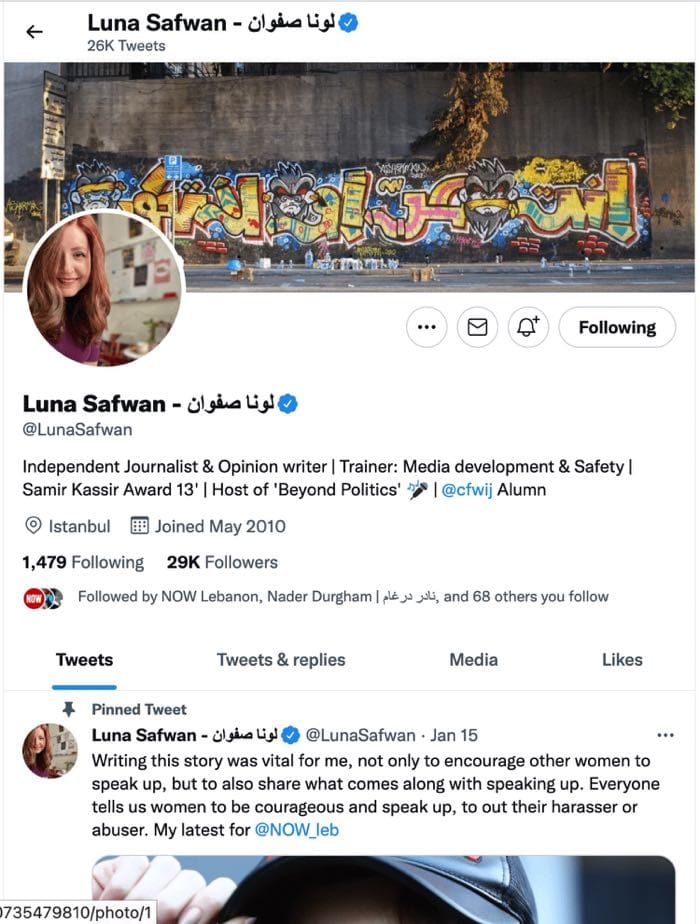 @LunaSafwan, Investigation, Election, Women (English): Luna Safwan is a Lebanese journalist & Communication Specialist, winner of The Samir Kassir Award for the freedom of Press/ Best audiovisual report (2013). She has been producing news articles, multimedia stories and features since 2010. She is currently focusing her work on the upcoming Lebanese general elections and investigating the endemic corruption in the country. Last year, she created the podcast Beyond Politics to talk about different economic and political issues in Lebanon. 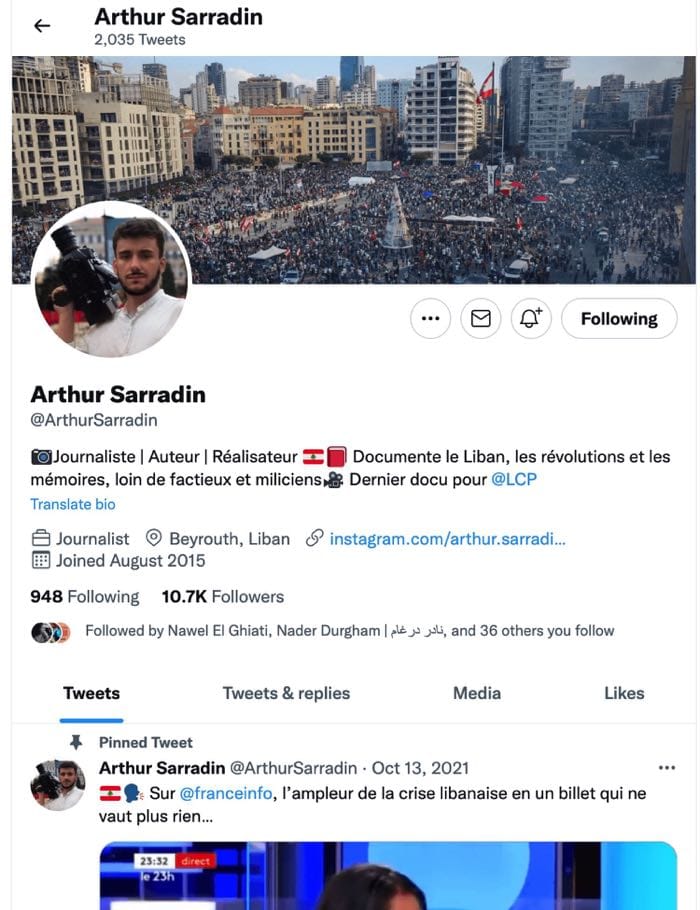 @ArthurSarradin, Revolution, Civil Society, Politics (French): Arthur Sarradin  is a journalist and film director in Lebanon, he’s been  documenting the revolution and its memory for the past 3 years. His latest documentary “Lebanon, the revolution is born from the bowels of grief” tells the story of the people who shaped the October 2019 movements. He tweets mainly  about civil mobilization, the economic crisis and accountability. 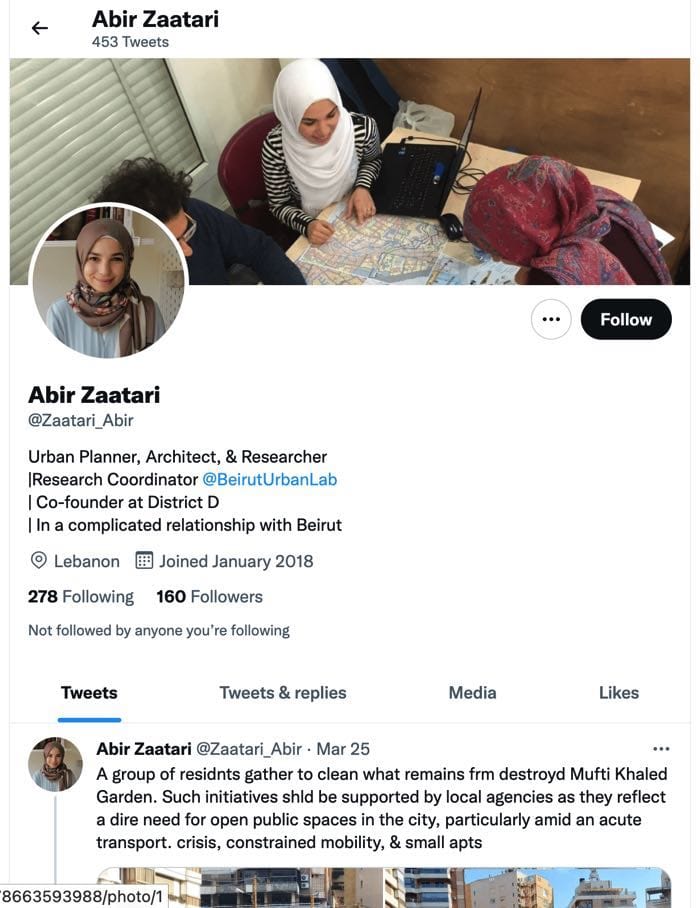 @Zaatari_Abir, Urban Planning (English) : Abir Zaatari is an urban planning researcher and architect working at the Beirut Urban Lab. From the impacts of state policies on housing justice and affordability in Beirut’s housing market to the latest development of Urban planning in the country, she will keep you informed of any unfair constructions and policies in Lebanon’s capital.

Keep up with Lebanese politics following these photographers and political cartoons 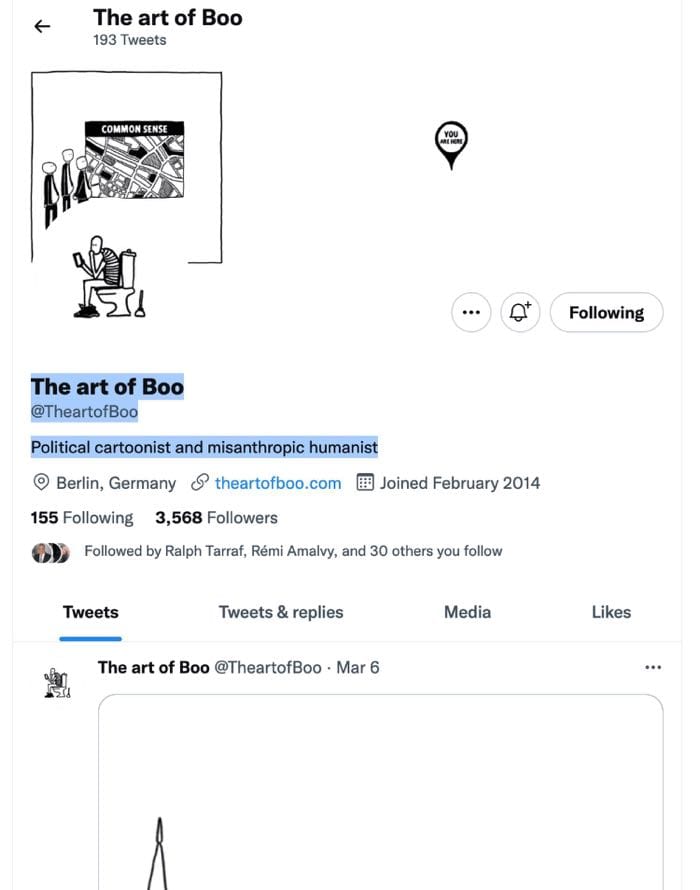 @TheartofBooPolitical Cartoon, Politics, Economics (French, English, Arabic): Bernard Hage, commonly known as “The Art of Boo”, is an illustrator, writer, musician and cartoonist. In his drawings,  he provides a much needed sarcastic and humoristic twist to current events in Lebanon . You will understand the news and laugh at the same time! 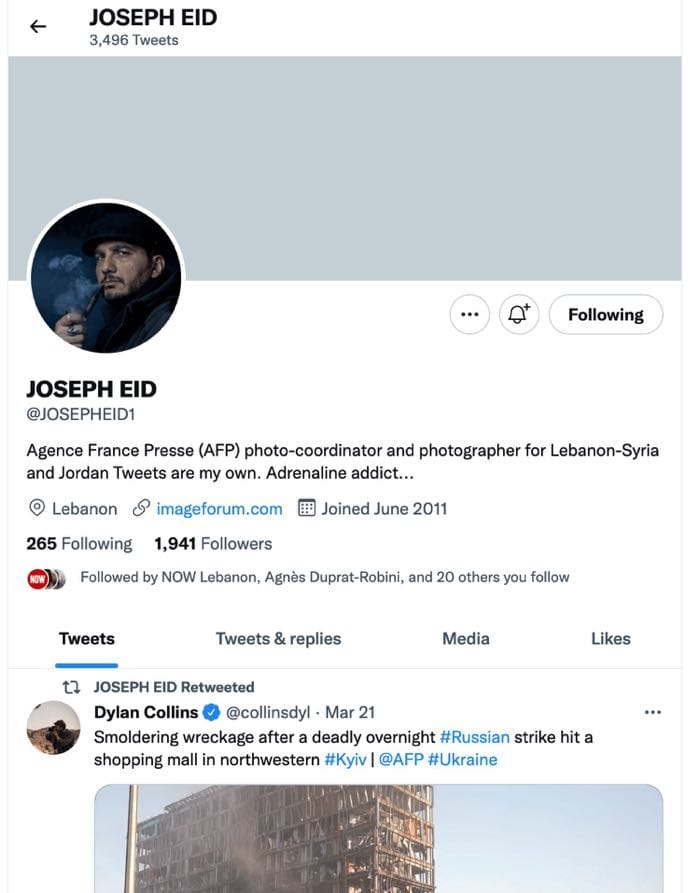 @JOSEPHEID1: Photography, News (English): Joseph Eid is the photo coordinator and a photographer for Agence France Presse (AFP) in Lebanon, Syria and Jordan. He has been documenting Lebanon through his lens for years. If you want to see what the news in Lebanon looks like in pictures, follow him . 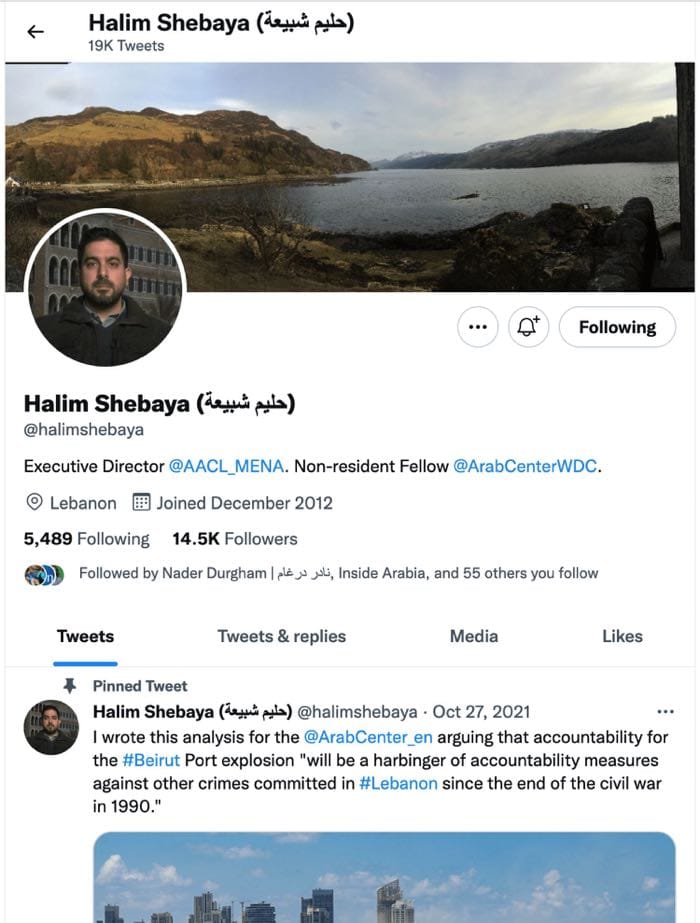 @halimshebaya, Accountability, Human Rights, Investigation ( Arabic, English): Halim Shebaya is a Beirut-based political analyst and multidisciplinary researcher. As the Executive Director of the Arab Association for Constitutional Law, he will keep you informed of all developments related to  legal affairs in Lebanon. 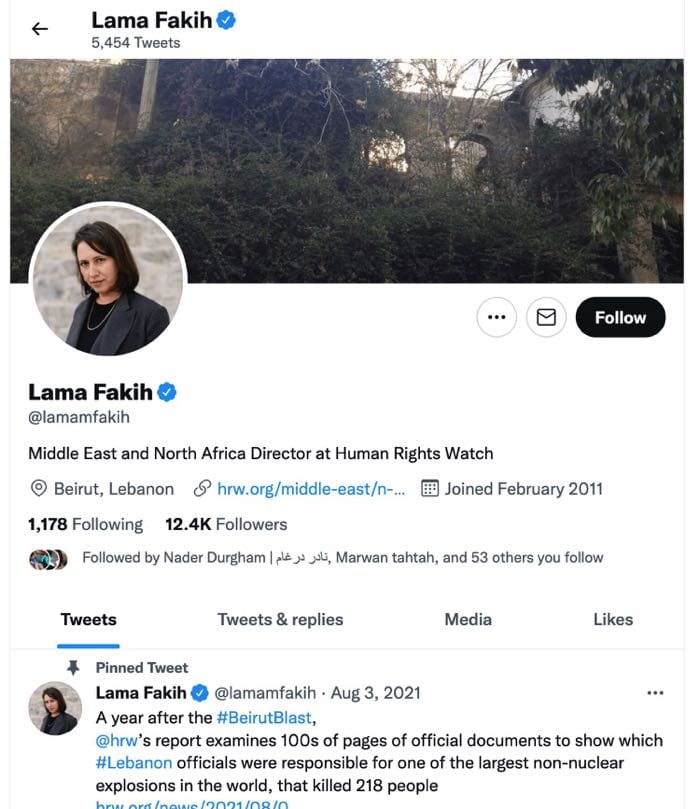 @lamamfakih, Human Rights, Accountability (English): Lama Fakih is the Middle East and North Africa director of Human Rights Watch and the Beirut office director. Anything related to human rights in Lebanon or the region is her concern and will become yours if you follow her. 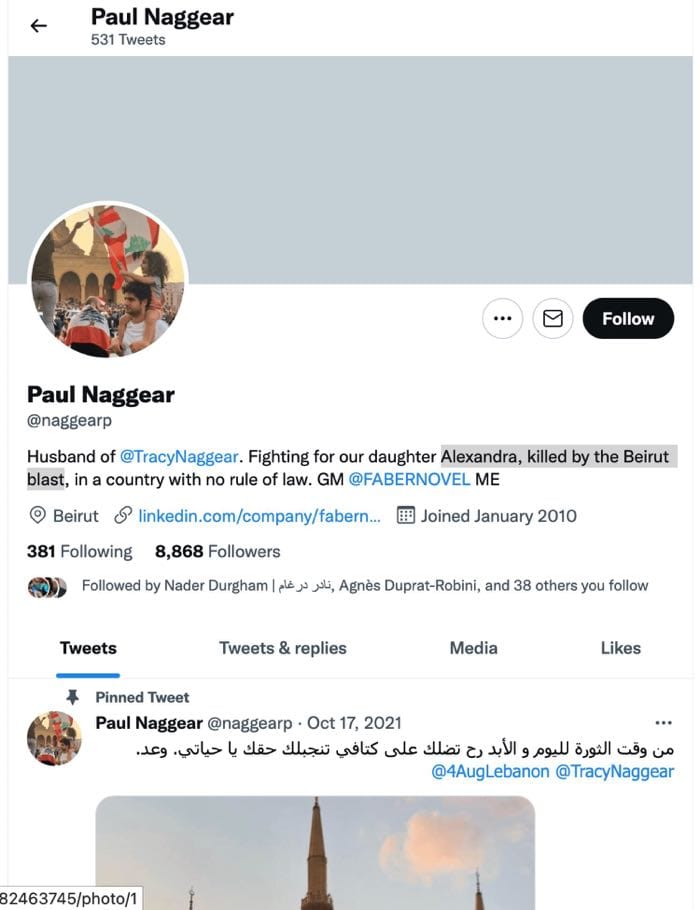 @naggearp, Beirut Port Explosion, Accountability (Arabic): Paul Naggear is the father of Alexandra Naggear, a young girl killed in Beirut’ port explosion on August 4, 2020. He is fighting against the culture of impunity in Lebanon and is actively pushing for an independent investigation on the events  that led to the blast. His tweets will allow you to follow the latest developments in the investigation of the Beirut Port explosion and the struggle of the victims’ families for justice. 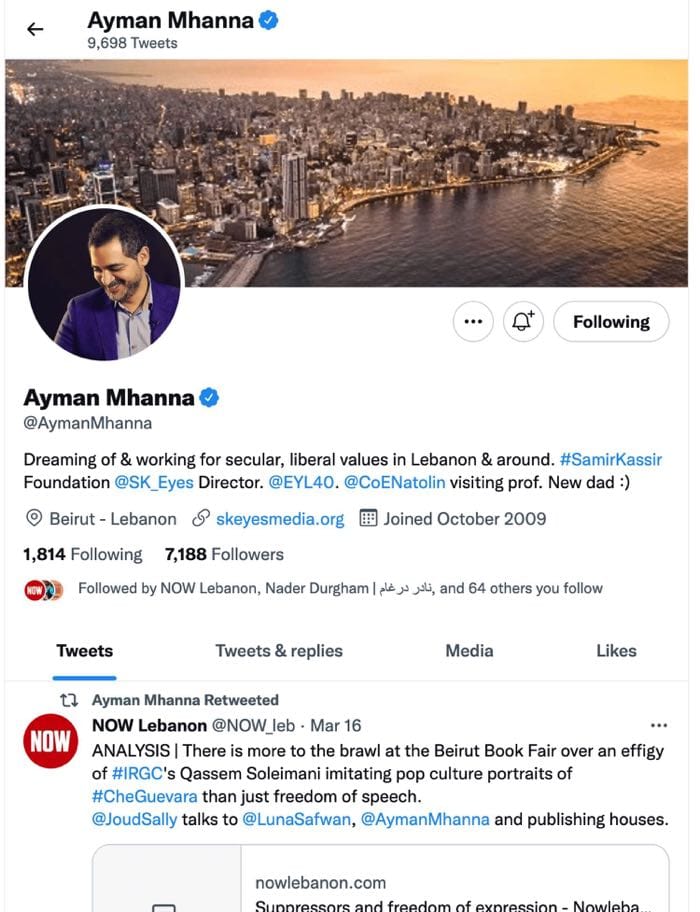 @AymanMhanna, Media, Human Rights (English): Ayman Mhanna is the Executive Director of the Beirut-based Samir Kassir Foundation, the leading NGO for freedom of expression in the Levant region. He is a visiting professor at the College of Europe, Natolin-Warsaw campus, where he leads a course on “New Challenges for Press Freedom”. His experiences make him the leading expert on the state of media freedom and freedom of expression not only in Lebanon, but in the entire region. 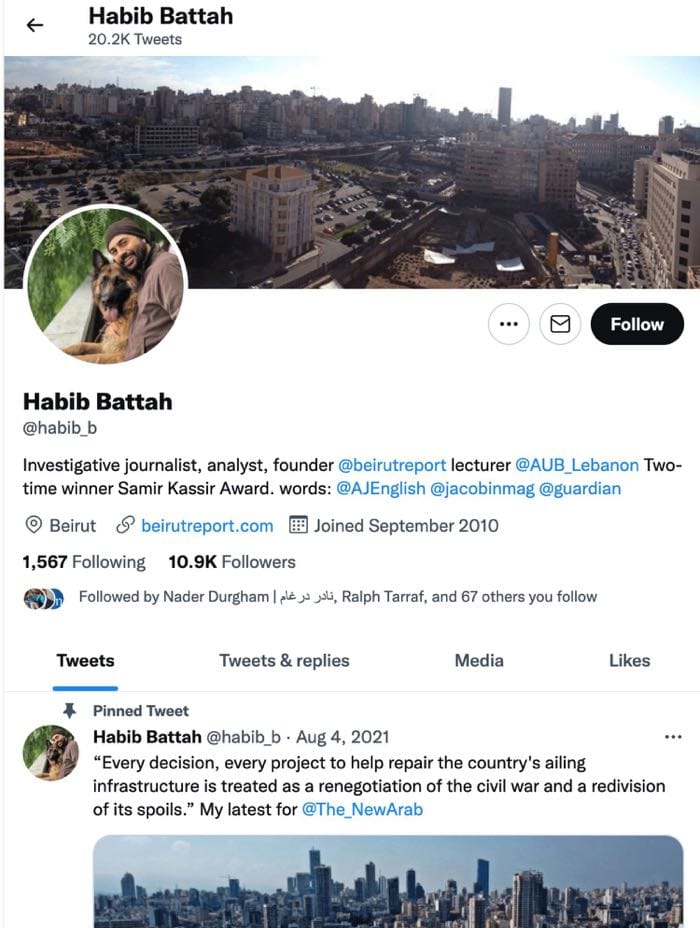 @habib_b, Investigation, Politics, Port Explosion (English): Habib Battah is an investigative journalist and founder of the news site beirutreport.com. Two-time winner of the Samir Kassir Award, he has covered Lebanon and the Middle East for over 15 years and teaches journalism and media studies at the American University of Beirut. Follow him for more information on all the investigative stories in Lebanon. 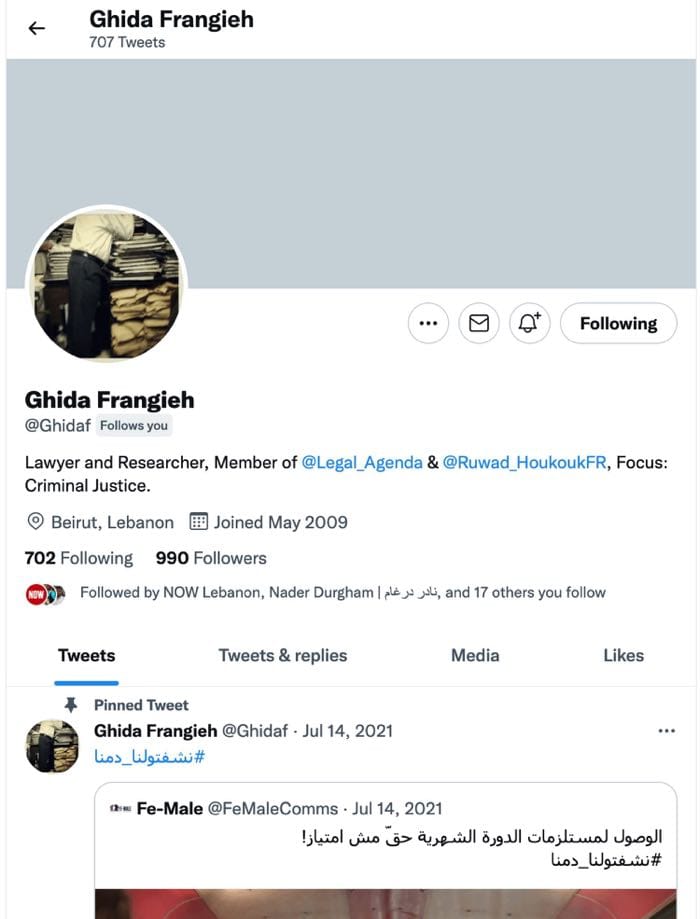 @Ghidaf, Justice, Legal matter (English, Arabic): Ghida Frangieh is a Researcher, member of Legal Agenda, a Beirut-based nonprofit research and advocacy organization with a special focus on political, civil, social, and economic rights. Her experience as a lawyer gives her unparalleled expertise on legal issues in Lebanon from criminal justice to migration, and citizenship.. 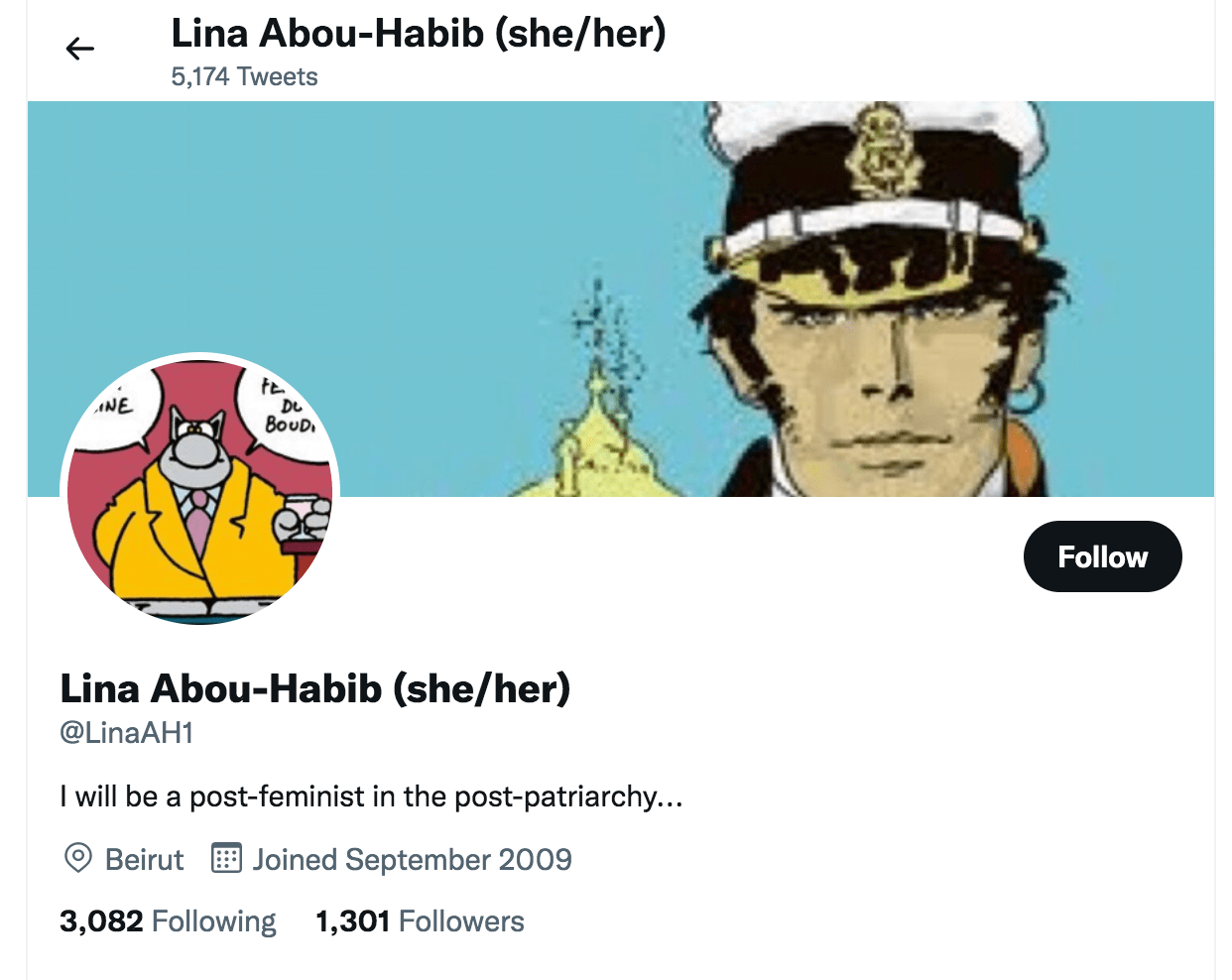 @LinaAH1, Feminism, Gender, Human Rights (English, Arabic): Lina Abou-Habib is the executive director of Women’s learning partnership. She will teach you a lot about mainstreaming gender in development policies, and keep you informed about anything related to gender issues in Lebanon. 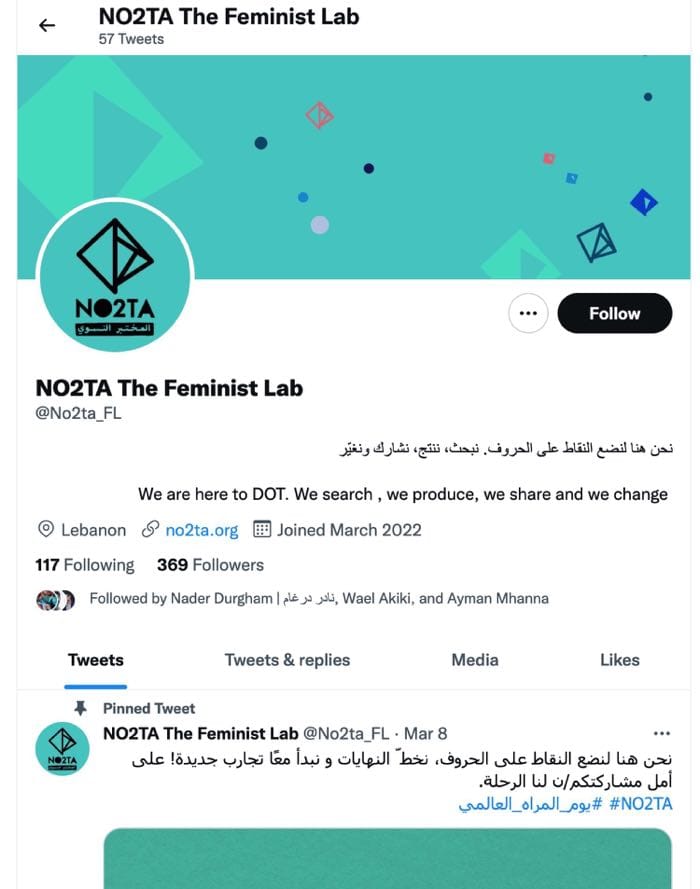 @No2ta_FL Feminism, Gender (English, Arabic): No2ta  is a feminist lab initiated and run by a group of women and feminists working in the media and creative production fields. The platform aims to put an end to gender injustice and patriarchy focusing on social behavioral change approaches. If you are looking for news related to gender in Lebanon do not hesitate to follow their twitter account. 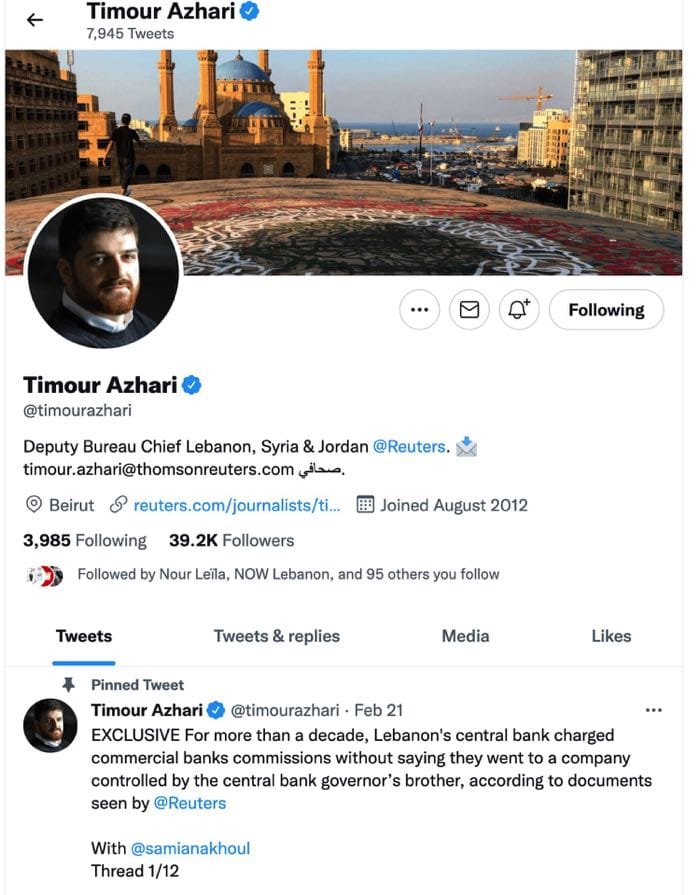 @timourazhari Breaking News (English): Timour Azhari is the deputy bureau chief for Lebanon, Syria and Jordan for Reuters. He previously worked for the Daily Stars and other media outlets. His many years of journalism have given him a wide range of contacts in Lebanon, allowing him to keep abreast of everything that is happening in the country. 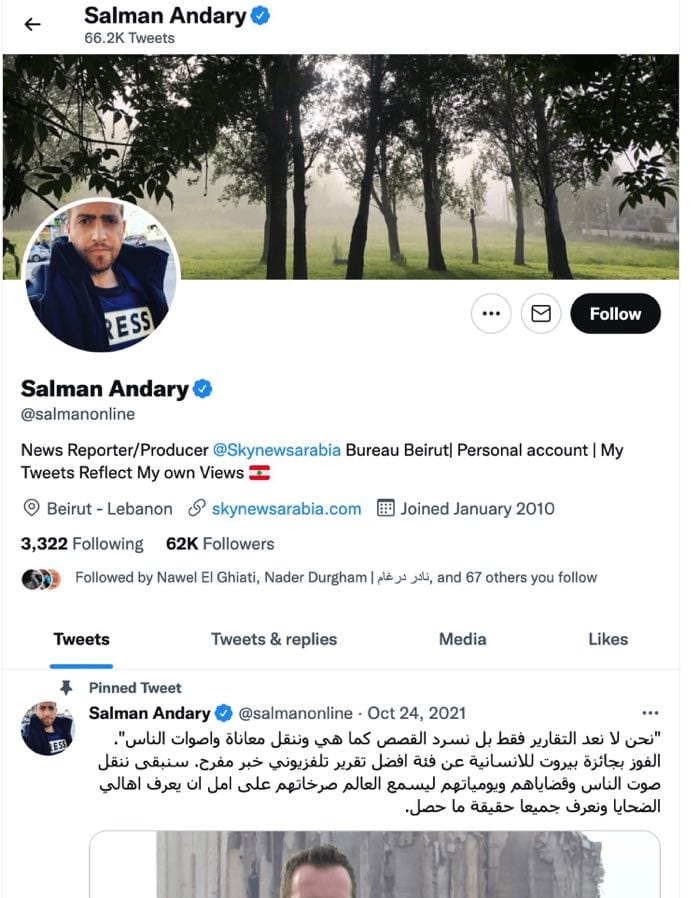 @salmanonline, Breaking News, Politics (Arabic): Salman Andary is a Lebanese journalist and the Beirut Bureau Reporter and Producer at SkyNewsArabia, one of the largest news channels in the Arab World. He won several international prizes including the best investigative report in the Arab World. He tweets mainly about breaking news and politics in the region. 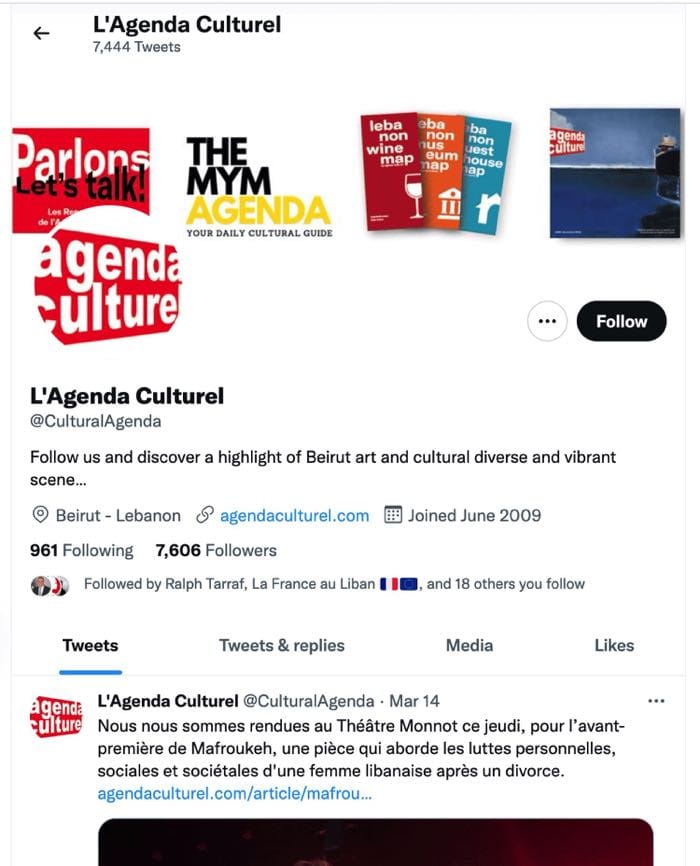 @CulturalAgenda Culture (French) : Since 1994, Cultural Agenda is the only print and online magazine specialized in the promotion of cultural activities in Lebanon. Whether you’re looking for a play, a wild techno night or a contemporary art exhibition, they will have you covered! 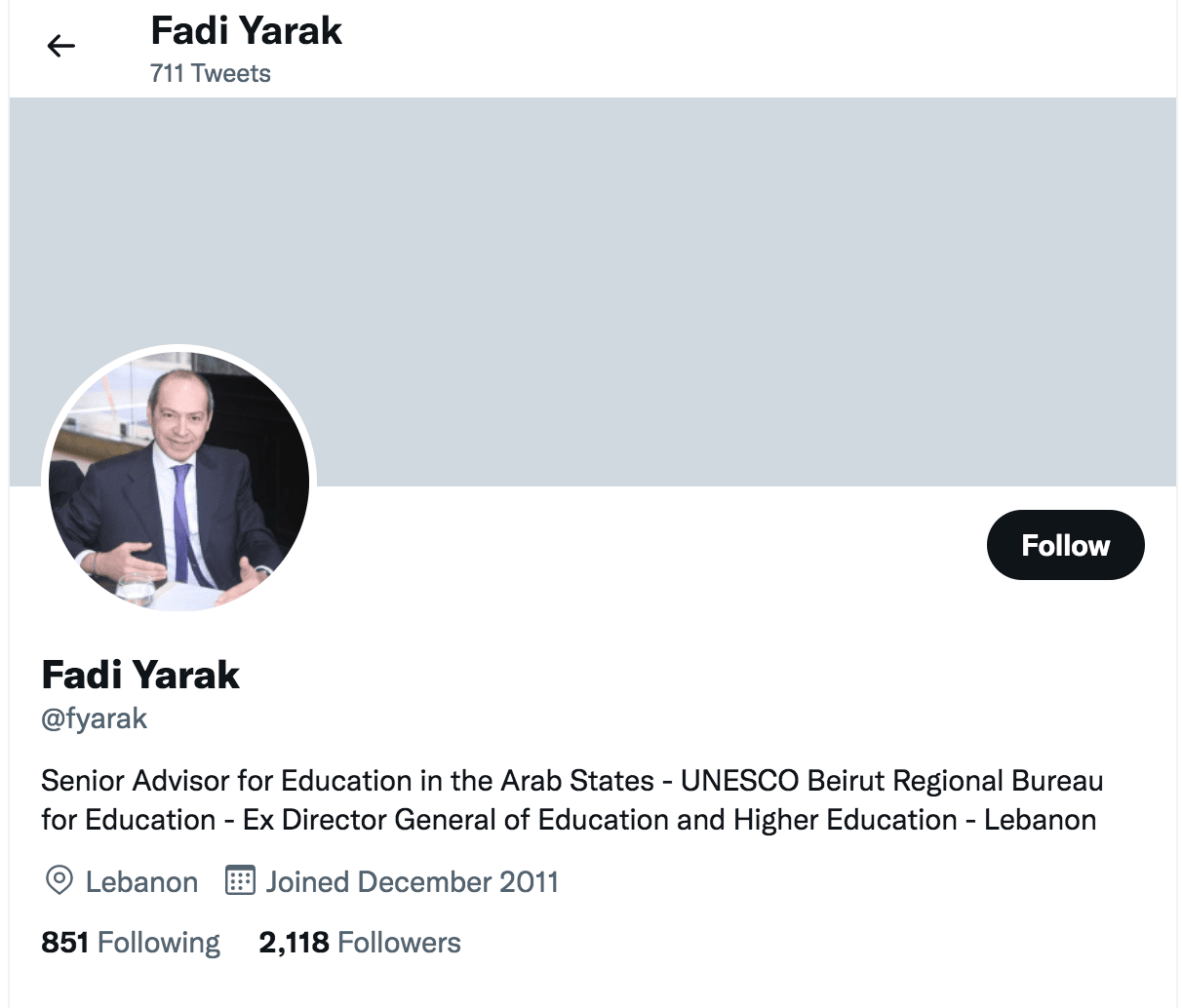 What about you, do you have any recommendations of people that you follow on Twitter that we could add to our list? Don’t hesitate it to tell us about it : com@alphabeticalorder.org

The state of education in Lebanon

How the COVID-19 pandemic transformed and affected education

Education as a solution to get countries out of poverty